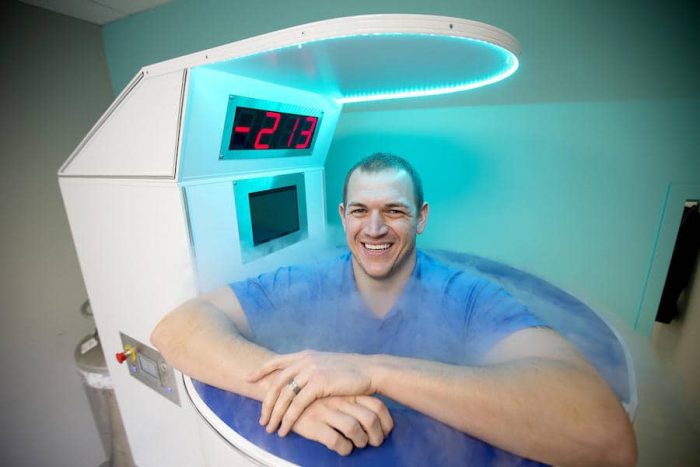 How is Cryotherapy delivered?

It can be administered in several different ways – depending on which body parts you need treatment on. Some of the main ways treatment is delivered to localised areas is by using ice packs, ice massage, coolant sprays, ice baths, and even through probes administered into tissue.

If you’re choosing to have whole-body Cryotherapy, the therapy will be slightly different and will involve immersing your whole body in cold air for several minutes instead. The air is extremely cold, and may feel uncomfortable for some people – but the benefits are plentiful. The ‘chamber’ of air you stand in surrounds your body, but your head will have an opening at the top.

What are the benefits of Cryotherapy?

There are many benefits of Cryotherapy, and it is a treatment that is extremely popular with athletes and people who are often physically active.

Here are some of the main benefits that people who have Cryotherapy can expect to experience:

One of the most common reasons people have Cryotherapy is to help with muscle pain, joint pain, chronic pain and muscle disorders, such as arthritis. There have been tests carried out to prove these results, such as a study published in 2000, that found Cryotherapy gave temporary, but effective pain relief from rheumatoid arthritis.

Cryotherapy is also known for helping with faster healing for athletic injuries, which makes it extremely popular with athletes and sports-enthusiasts. It has been a popular choice for high-profile sports teams and athletes for many years, and the benefits of the treatment have now become more well known in the mainstream.

Cryotherapy can also help relieve and ease the symptoms of migraines. Having cool air, or ice-packs placed on the neck or upper back can help with localised pain relief for migraine symptoms such as pressure headaches, throbbing and painful tension.

Whilst Cryotherapy isn’t the miracle answer to weight loss, it can help with speeding up your metabolism and increasing the rate at which you burn calories. In cold temperatures, your body has to work much harder to stay warm, which in turn increases the rate at which your burn is using energy.

An alternative to this can be using fat dissolving injections.

A small 2008 study of people with eczema, showed that the participants who tried cryotherapy saw improvements in the symptoms of Eczema that they were previously experiencing.